Structure of the skeleton

The bones of the skeleton can be divided into two different and distinct categories: 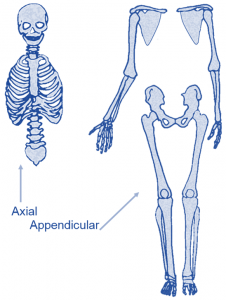 The vertebral column or spine is made up of 33 bones, divided into five main areas. Twenty-four of these bones or vertebrae are individual and unfused, whilst the remaining 9 are fused (joined) together. The five areas are as follows:

The vertebral column forms four curves. The cervical and lumbar curves are convex, while the thoracic and sacral curves are concave. These curves help to increase the strength of the structure, as well as acting like a spring and absorbing shocks or impacts – thus helping to reduce the risk of injury. They also help to centre the skull over the body, allowing easier walking and the maintenance of posture. 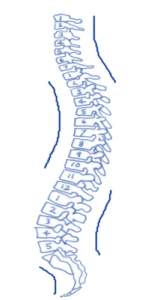 Inter-vertebral discs: in-between each vertebra there exists a disc of fibro-cartilage. This disc is a very tough and resilient tissue whose function is to allow a small amount of movement between the vertebrae and to absorb shock.

The rib cage consists of 12 pairs of ribs. These ribs form the walls of the thoracic cavity. The rib cage helps to protect many vital organs such as the heart and lungs. It also enables the lungs to inflate by moving upwards and outwards during inspiration. The first 7 pairs attach directly onto the front of the sternum (breastbone) via costal cartilage. The next 3 pairs are attached to the seventh rib, again via costal cartilage. These are known as ‘false ribs’. The last 2 pairs of ribs are not attached to anything at the front (only the thoracic vertebrae at the back). These are known as ‘floating ribs’.

The cranium is a complex bony structure consisting of many individual bones which are joined together edge-to-edge by fibrous interlocking joints known as sutures. The main function of the cranium is to protect the brain and the vital senses of sight, hearing and balance. All together, the cranium consists of 8 bones which are fused together. The face has 14 bones, most of which are fused together, whilst the mandible (the jawbone) can move independently and is the only truly moveable bone of the skull. It is also the strongest facial bone, whose function is biting, tearing and masticating (chewing) food.

The pectoral girdle forms the basis of attachment of the upper limb to the trunk. Each consist of a clavicle (collar bone), which joins with the sternum (breastbone) at the front, and with the scapula (shoulder blade) behind.

The upper limb consists of three main regions – the arm (from shoulder to elbow), the forearm (from elbow to wrist) and the hand. The humerus is the longest and largest bone of the upper limb, and is the only bone in the arm. It articulates with the scapula above, and with the radius and ulna of the forearm below.

The radius and ulna are two long slender bones, arranged in parallel, which can rotate around each other. These are, in turn, joined to the wrist. The ulna and the radius join two rows of 4 carpal bones at the wrist. The palm of the hand consists of 5 metacarpal bones, which join with the phalanges of the thumb and fingers. Each of the fingers consist of 3 phalanges, and the thumb two phalanges, making a total of 14. 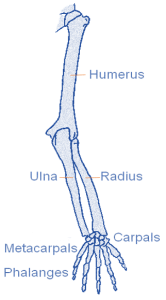 The pelvic girdle consists of strong sturdy bones which form a complete bony ring. The bones which make up the pelvic girdle are the two hip (coxal) bones, and the sacrum of the vertebral column. Each of the hip bones consists of three bones – the ilium, ischium and pubis – which are fused together. They articulate with each other at the pubis symphysis in front and with the sacrum at the sacroiliac joints behind. This arrangement provides a strong, relatively immobile structure. This is very important in the transmission of weight between the trunk and the lower limbs. The pelvis also functions to protect the internal reproductive organs and the bladder.

The thigh consists of a single long bone called the femur (thigh bone), which is the longest, heaviest and strongest bone in the body. It bears the weight of the body and shocks caused by movement. The femur fits into a socket in the pelvis, and at the other end joins the tibia to form the knee joint.

The leg consists of 2 long bones (the tibia and fibula) which are arranged parallel to each other, but are unequal in size. The tibia (shin bone) is thick and heavy and the fibula is slender and light. The fibula acts as a support to the ankle and to the muscles of the lower leg.

The foot consists of 7 tarsals arranged in two groups and 5 metatarsals which form the major part of the arch of the foot. The tarsals and metatarsals help support the body weight. The 14 phalanges are much smaller than in the hand, as they have little active function. The big toe has only 2 phalanges, while all the other toes have 3.