The main focus of learning theory is an analysis of the relation between stimulus and response. A stimulus is any event (internal or external) that changes a person’s behaviour (Kimble, 1961). This change is called a response. If talking to a fitness instructor (the stimulus) encourages you to increase your physical activity levels and adopt a healthier lifestyle (the response), then learning has occurred.

Another important aspect of learning theory is reinforcement, which refers to any favourable outcome that results from a response. Reinforcement increases the probability that a response will be repeated. Responses that are not rewarded, in contrast, tend to be discarded, and actions that are punished may be actively avoided. This suggests that learning a new behaviour usually requires frequent rewards and pleasant consequences, especially in the beginning. Exercise is often perceived as immediately punishing (e.g. painful (DOMS), fatiguing, time-consuming), whilst many rewards (e.g. more energy, improved health, etc) are more long-term and are not experienced immediately. A person is more likely to exercise or increase physical activity levels when the right conditions are in place and pleasurable/rewarding consequences result from the exercise/activity.

Early learning theorists developed the concepts of generalisation and discrimination:

Learning theory suggests that when developing a new, complex behaviour such as starting an exercise programme or increasing physical activity levels, it is important to start with small steps and then progress slowly toward the desired goal (known as shaping). All too often, new exercisers start programmes that are too intense, too long, or too frequent. As a result, they may become frustrated or injured and may drop out of the exercise programme altogether. By starting with small steps and gradually progressing over time, the new exerciser can experience success and accomplishment, and learn strategies for overcoming barriers that may have previously resulted in drop out. As the client develops their skills at each small step, the goal is gradually increased and rewards are given for each step achieved. Some new clients, however, feel that starting their exercise programme like this is somehow less preferable and may discount this approach, which may lead to early drop out from the exercise programme. Miller and Dollard (1941) laid down the foundations for modern social learning theory by proposing that imitation could be explained by basic principles of stimulus, reward and reinforcement. They stated that most of the socialisation process is a result of children being reinforced, intentionally or not, for imitating others.

From this, Bandura (1973, 1977) developed social learning theory, which basically states learning can occur by observing, though not necessarily performing, the behaviour of another person. The behaviour of the other person (the model) serves as a source of information, which the observer then uses to perform the same behaviour later. Bandura believed that reinforcement may have little influence in determining whether or not a behaviour is learned – stating that reinforcement affects only the performance of a behaviour. In other words, he believed that paying attention to a model and mentally rehearsing the model’s actions are sufficient for learning. For example, a person observes that fashion models in glossy magazines are all thin due to their diet and exercise regime. She wants to look like them, and therefore diets and takes up exercise.

Whether or not a person pays attention to a model, thereby starting the social learning process, depends on characteristics of both the model and the observer. Characteristics of a model such as novelty and attractiveness will increase the chances that an observer will pay attention to them. In addition, an observer’s belief that the model’s behaviour is functional (useful) will improve the extent to which they attend to the model. Mental rehearsal (imagining yourself performing the behaviour) completes the learning process. The actual performance of the behaviour, however, partly depends on the observer’s ability, as well as the presence of reinforcements either from others or from themselves. There are four stages of this observational learning, which are summarised in the diagram below: 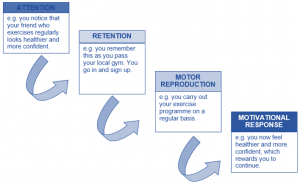 Bandura in 1986 developed his social learning theory further into social cognitive theory. He states behaviour change is affected by interactions between the environment, personal factors, and attributes of the behaviour itself. All three of these factors affect and are affected by each other.